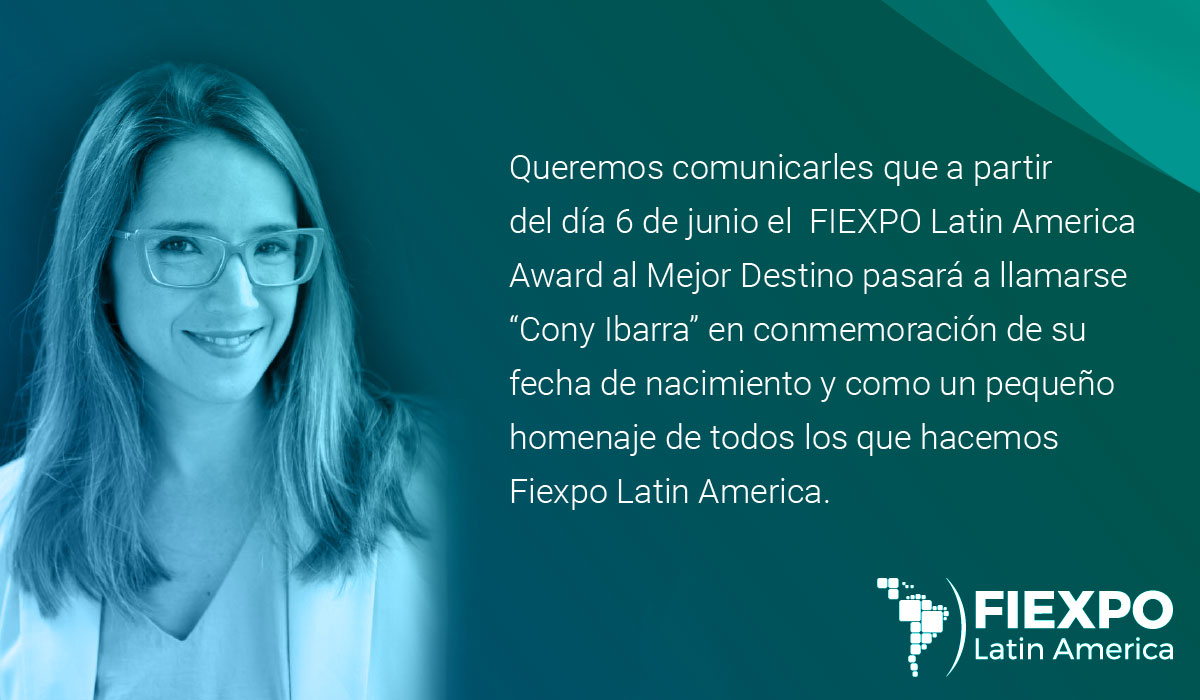 On June 6th, FIEXPO officially communicates that the Best Destination Award will be called CONY IBARRA.

The FIEXPO Latin America Award was established at FIEXPO 2019 with the aim of promoting excellence in the work done by Latin American destinations and to recognize each year the cities or countries that, in the jury’s opinion, have done the best job in attracting, promoting and positioning themselves globally. In that first opportunity the award was given to the city of Guayaquil.

It was in that same year, specifically in August, that we were struck by the sudden and unexpected pass away of Constanza Ibarra, Manager of Meetings Tourism of Ente de Turismo de la Ciudad de Buenos Aires. Known by all as Coni, she was an outstanding young professional who with her charisma and charm reaped the friendship of many and the affection of all.

Her vision of the industry and her work to position Buenos Aires as a leading destination, together with the team of the Ente de Turismo, INPROTUR, The Ministry for Tourism and Sports of Argentina, AOCA and the Buenos Aires Convention Bureau, was decisive for the rapid advancement of the city, to the point that today it ranks first in Latin America in the ICCA ranking.

Coinciding with her date of birth, June 6 th , we would like to officially communicate that the Best Destination Award will now be called &quot;CONI IBARRA&quot;, as a small tribute from all of us involved in FIEXPO Latin America.

The 2020 award will be presented in November in the city of Cartagena.

Her memory will remain forever in all those of us who had the pleasure of meeting her.

After reaching the highest global standards in the Exhibitions Industry corresponding to the criteria for UFI, FIEXPO received an Approved International Event label.

We are pleased to announce that together with the Colombian authorities, we have decided to…

ADMIN
We use cookies on our website to give you the most relevant experience by remembering your preferences and repeat visits. By clicking “Accept”, you consent to the use of ALL the cookies.
Cookie settingsACCEPT
Manage consent

This website uses cookies to improve your experience while you navigate through the website. Out of these, the cookies that are categorized as necessary are stored on your browser as they are essential for the working of basic functionalities of the website. We also use third-party cookies that help us analyze and understand how you use this website. These cookies will be stored in your browser only with your consent. You also have the option to opt-out of these cookies. But opting out of some of these cookies may affect your browsing experience.
Necessary Always Enabled
Necessary cookies are absolutely essential for the website to function properly. These cookies ensure basic functionalities and security features of the website, anonymously.
Functional
Functional cookies help to perform certain functionalities like sharing the content of the website on social media platforms, collect feedbacks, and other third-party features.
Performance
Performance cookies are used to understand and analyze the key performance indexes of the website which helps in delivering a better user experience for the visitors.
Analytics
Analytical cookies are used to understand how visitors interact with the website. These cookies help provide information on metrics the number of visitors, bounce rate, traffic source, etc.
Advertisement
Advertisement cookies are used to provide visitors with relevant ads and marketing campaigns. These cookies track visitors across websites and collect information to provide customized ads.
Others
Other uncategorized cookies are those that are being analyzed and have not been classified into a category as yet.
SAVE & ACCEPT
Powered by